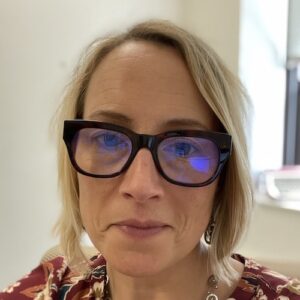 Meg Heckman is a journalist, author and educator focused on building a news ecosystem that is robust, diverse and equipped to serve all segments of society. Her core research examines the practice and evolution of journalism through a feminist lens with the goal of better understanding the role women have played in the creation of news and, by extension, civic life.

Because an important element of inclusive journalism is ensuring the tools of media innovation are available to all communities, Meg also engages in research exploring the contours of digital news production and dissemination, especially as it relates to local newspapers. She embraces a variety of qualitative practices—oral history, archival research, case studies, ethnography—and collaborates often with colleagues using quantitative methods in the digital humanities, gender studies, sociology and data science.

Her book, Political Godmother: Nackey Scripps Loeb and the Newspaper That Shook the Republican Party, documents the lasting impact of publisher and conservative activist Nackey Scripps Loeb, who, during the second half of the twentieth century, used her New Hampshire-based newspaper to shape national politics in ways that still reverberate today. The book, according to one reviewer, “not only chronicles the life of a fascinating woman but also the rise of right-wing populism in American politics and the strategies and tactics conservative media organizations… successfully implemented to foster growth over the past several decades.”

Meg strives to distribute her research in ways that contribute to building more inclusive news organizations now and in the future.  Her work has appeared in a variety of periodicals including the Columbia Journalism Review, USA Today, Poynter.org and The Conversation, as well as scholarly publications such as the Newspaper Research Journal and Teaching Journalism and Mass Communication.  She’s presented work at academic conferences in the U.S., Europe and Canada, and is a regular speaker at events for news industry leaders. In 2019, she was a delegate to the World Journalism Education Congress in Paris where her duties included serving on a committee tasked with developing best practices for gender-inclusive journalism education.

She is currently an assistant professor at Northeastern University’s School of Journalism and Media Innovation. Before coming to Northeastern in the fall of 2017, Meg was a journalism lecturer at the University of New Hampshire where she served as a faculty fellow at the Peter T. Paul Entrepreneurship Center. She spent more than a decade as a reporter and, later, the digital editor at the Concord (NH) Monitor, where she developed a fascination with presidential politics, a passion for local news and an appreciation for cars with four-wheel drive.