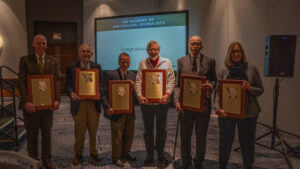 The Yankee Quill Award recognizes New England journalists who have provided great contributions and excellence to the field in the region. This annual award, which was first given out in 1960, is presented by The Academy of New England Journalists. This year’s six recipients were celebrated during a luncheon at the New England Newspaper & Press Association’s annual convention in Boston on April 29, 2022.

During his speech, Bass provided his interpretation of the Yankee Quill Award and celebrated the field of journalism and its state today.

“I think it’s an award for all of us,” said Bass. “I think we’re lucky to do [this] job…I think it’s the best time to be a journalist right now.”

The next recipient was Tom Condon of the Hartford Courant. Condon joined the Courant in 1968 where he stayed until retirement in 2015. Condon led successful investigative projects in Connecticut that stopped illegal shellfishing, freed wrongfully convicted men, and required police to record custodial interrogations. He also reported on humanitarian efforts by veteran groups in Vietnam. Condon was inducted into the NENPA Hall of Fame in 2016.

Condon reflected on his time with the Courant.

“They were also great colleagues. In those days, you learned the business by doing it, by reading people” said Condon.

The third recipient was Melvin B. Miller of the Bay State Banner who graduated from the Boston Latin School, Harvard College, and Columbia Law School. In the early 1960s, Miller worked as an Assistant U.S. Attorney in Massachusetts. In 1965, he founded the Bay State Banner with the intent of providing the state’s Black population with social and political news from the community itself. Miller also served as vice president and general counsel of WHDH-TV from 1982 to 1993 in Boston.

“I thank you, all my brothers and sisters, who work hard to bring information to all the citizens who sometimes will sleep and not pay attention to what’s going on,” said Miller.

The next recipient was Marianne Stanton who began her career in the industry at a young age. At 11, she started delivering her family’s Nantucket-based newspaper, the Inquirer and Mirror and at age 13 she started working the printing press. It wasn’t until 1981 that Stanton began reporting for the paper and four years later, she became the editor. The paper was sold to Ottaway Newspapers in 1990 and then sold to several other corporations before it was purchased by GateHouse Newspapers (now owned by Gannett.) By October 2020, Stanton had developed funding and bought her family’s newspaper back, returning it to its locally owned roots.

“I couldn’t do this job without the support of my family and tremendous colleagues,” said Stanton. “Even though I’m a publisher, I’m a reporter at heart.”

The fifth recipient was Terrence L. Williams from the Keene Sentinel. After graduating from UNH in 1980, Williams went on to report for the Lowell Sun, working his way up in the newsroom. By 1988, he had been hired by the Telegraph Publishing Co. as a managing editor and eventually its president and publisher. Williams joined the Keene Sentinel in 2013, as their president and chief operating officer, a position he still holds today. Williams was the NENPA president in 2014 and currently serves on the executive board.

“Journalism can be a humbling profession as we all know,” said Williams. “What’s truly important to me are family, friends, colleagues, and mentors and my associations with so many of you have left your initials in me.”

The final award posthumously honored William Monroe Trotter, co-founder, and editor of the Boston Guardian. Trotter founded the paper in 1901 with George W. Forbes. Trotter used the paper to advocate against Jim Crow laws not just locally, but at the federal level as well. Despite much backlash from the White House and spending 30 days in a Boston jail for protesting, Trotter remained diligent in his mission to use the Guardian as a tool for social justice. He also helped found the Niagara movement in 1905 and reinvigorated the National Equal Rights League.

Scroll down the page to NENPA Gallery and use code NENPA to log in. Use the dropdown menu to scroll between Albums.