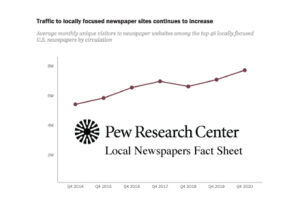 The transition to digital news consumption has hit the newspaper industry hard in recent years. Some national publications have managed to weather the storm in part by attracting digital subscribers, but many local newspapers have been forced to shutter their doors permanently, especially during the coronavirus pandemic.

To gain a clearer picture of how locally focused U.S. newspapers have fared in the digital age, Pew Research Center researchers reexamined data included in the Center’s State of the News Media newspapers fact sheet, excluding four publications that reach a large national audience. (Three of these four newspapers reach national audiences in addition to their respective local audiences.) These four publications – The New York Times, The Washington Post, The Wall Street Journal and USA Today – account for a large share of circulation in the newspaper industry and as such overshadow their locally-focused counterparts in the data. Specifically, this analysis looks at economic data from publicly traded newspaper companies’ financial statements (2011-2020 for digital advertising revenue and 2013-2020 for total revenues), circulation data from Alliance for Audited Media (2015-2020), and digital audience data from Comscore (2014-2020). This addendum supplements the State of the News Media newspapers fact sheet, which presents the analysis at the overall industry level.