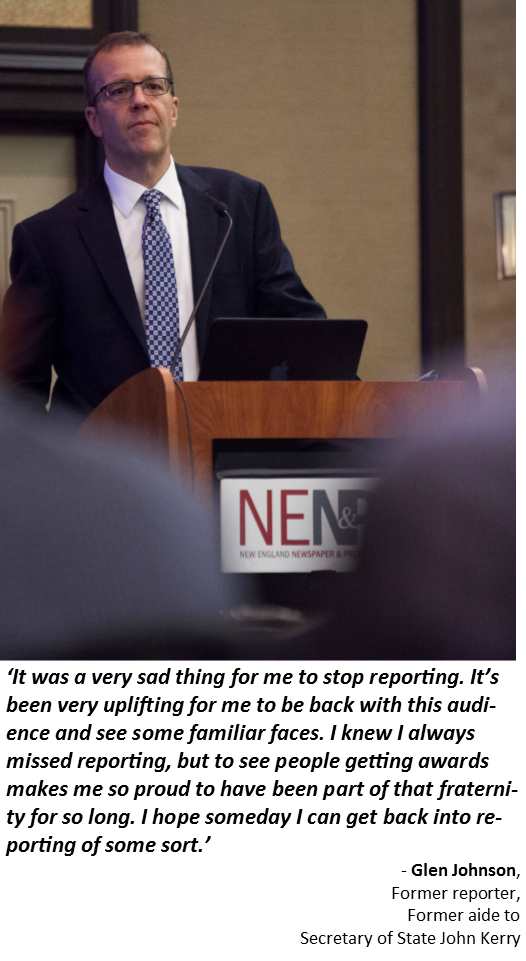 Glen Johnson was a reporter for The Sun of Lowell, Mass., when he first met John Kerry, then a Democratic U.S. senator from Massachusetts. That brief interaction happened in the Sun newsroom while Kerry was being interviewed by another reporter, but it would be the first of many interactions between Johnson and Kerry. More than 20 years after they first met, Johnson began working for Kerry, who was then U.S. secretary of state.

“If I was sitting in your seat, I know I’d be wondering what this was like because I stepped through a barrier that changes careers,” Johnson said.

on his transition from a political columnist to the four years he spent by Kerry’s side as deputy assistant secretary for strategic communication. 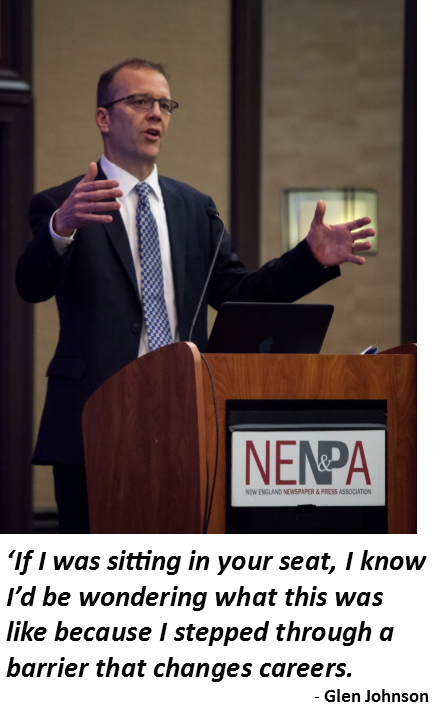 Johnson had always had an interest in politics, beginning with his first coverage of a presidential candidate, when he followed the bid for the Democratic nomination of Paul Tsongas, a former U.S. senator from Lowell. Johnson covered Kerry’s bid for the presidency in 2004.

During the race, Johnson asked Kerry whether he was sick. Kerry said no. It was revealed a day later that Kerry had prostate cancer and needed to have an operation immediately. Johnson thought that Kerry might not be a huge fan of him after that incident, fearing that he had pushed Kerry’s buttons when pressing him about his health. That led to Johnson being even more surprised when he got the call.

“He told me I was his ‘first-round pick’ for the position,” Johnson said.

Johnson and his family agreed that it was an opportunity that he couldn’t pass up. He was working for The Boston Globe at the time. Johnson had doubts; he said resigning from the Globe was one of the hardest things he has ever had to do, professionally and personally. He was also worried that the editor of the Globe, Brian McGrory, would be resentful toward him. But instead, McGrory told Johnson to pursue the opportunity.

“He said, ‘If you told me you were going to work for the Massachusetts Democratic Party, I’d say you’re making a big mistake, but this is a once in a lifetime opportunity’,” Johnson said.

After passing background checks, Johnson was officially working for Kerry, and was put to work right away.

“It was more grueling than expected. I worked my tail off as a reporter, but I worked harder as a government official,” Johnson said. “My schedule was too unpredictable while traveling around with the State Department; I had no idea where I’d be.” 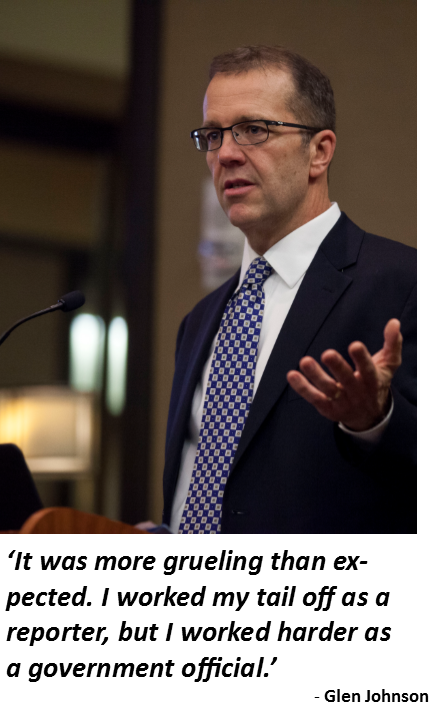 Johnson also was in charge of crisis communications. One such occasion arose in France, when Kerry broke his leg while riding a bike. Johnson had to help get him to

Geneva, Switzerland, then to Germany, where he got a medical evacuation back to Boston. Johnson made sure that the first photo released of Kerry post-surgery showed him doing well.

All in all, Johnson spent an aggregate 120 days in the air, visited 91 countries, and traveled 1.4 million miles. Johnson was with Kerry when he tried to negotiate a deal between Israel and Palestine, when he was meeting with the former

prime minister of Australia, Tony Abbott, and when Kerry went to the South Pole to see glaciers receding, among plenty of different diplomatic ventures both abroad and at home.

While Johnson’s time working for Kerry has come and gone, and his time at the Globe ended years ago, Johnson still misses being in the newsroom.

“It was a very sad thing for me to stop reporting. It’s been very uplifting for me to be back with this audience and see some familiar faces,” Johnson said. “I knew I always missed reporting, but to see people getting awards makes me so proud to have been part of that fraternity for so long. I hope someday I can get back into reporting of some sort.”

Johnson is writing a book about his time as an aide to Kerry. He hopes for it to be out before the 2018 elections. 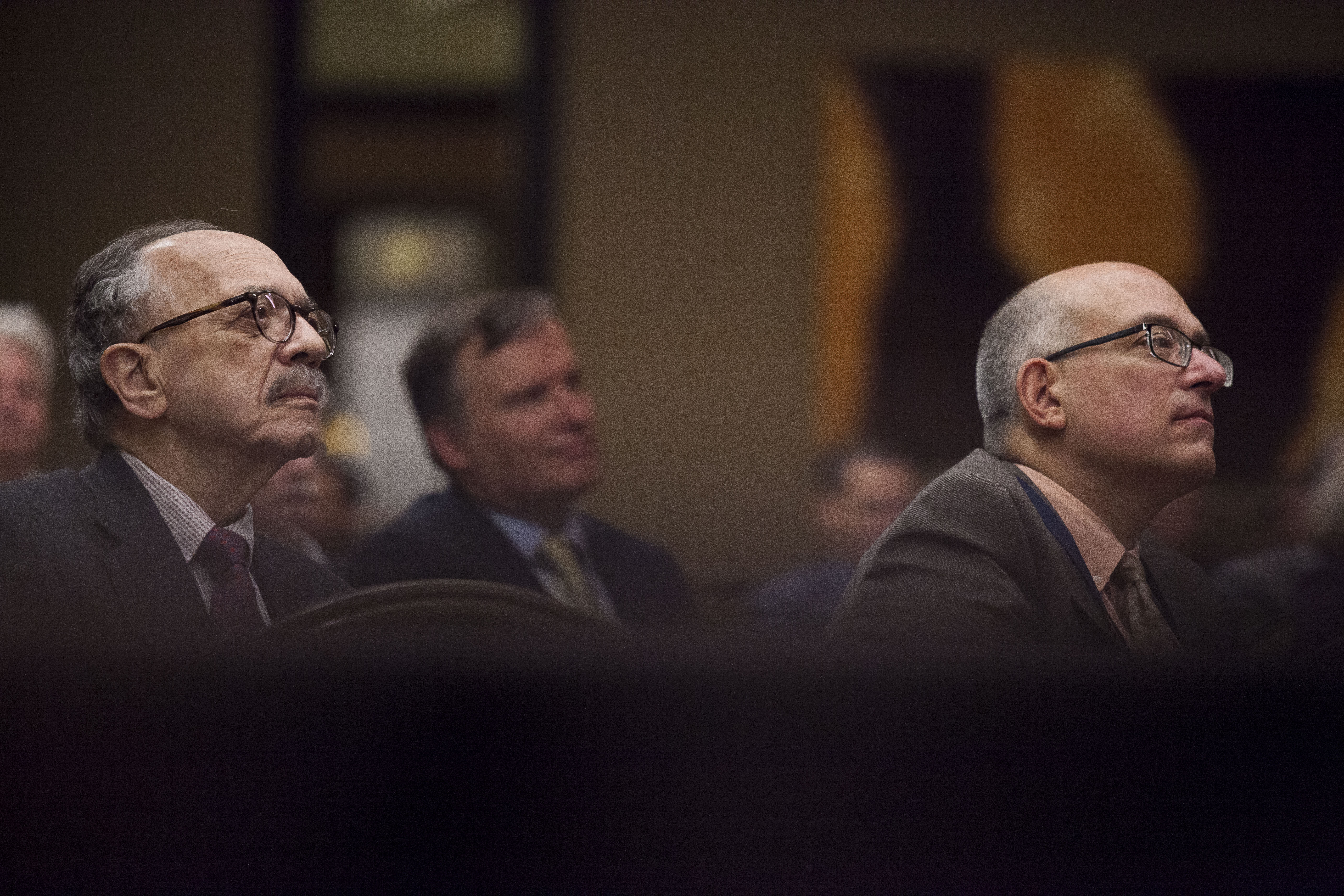 Members of the audience at Glen Johnson’s talk listen intently