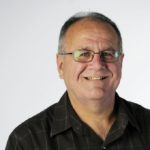 ourant, Otterbein was assistant sports editor at the Sun Sentinel of Fort Lauderdale, Fla. Brechlin was previously the deputy metro editor for the Hartford Courant. Before joining the Courant, he was city editor for the Record-Journal of Meriden for six years. He was a reporter there until 2014 and then city editor from 2014 until 2016. He also has been a reporter for the Southington Citizen and the Plainville Citizen.

The Transition was written, at least in part, from a published report by Bulletin correspondent Monica Nair.