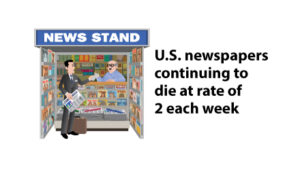 NEW YORK (AP) — Despite a growing recognition of the problem, the United States continues to see newspapers die at the rate of two per week, according to a report issued Wednesday on the state of local news.

Areas of the country that find themselves without a reliable source of local news tend to be poorer, older and less educated than those covered well, Northwestern University’s Medill School of Journalism, Media and Integrated Marketing Communications said.

The country had 6,377 newspapers at the end of May, down from 8,891 in 2005, the report said. While the pandemic didn’t quite cause the reckoning that some in the industry feared, 360 newspapers have shut down since the end of 2019, all but 24 of them weeklies serving small communities.

An estimated 75,000 journalists worked in newspapers in 2006, and now that’s down to 31,000, Northwestern said. Annual newspaper revenue slipped from $50 billion to $21 billion in the same period.

News “deserts” are growing: The report estimated that some 70 million Americans live in a county with either no local news organization or only one.