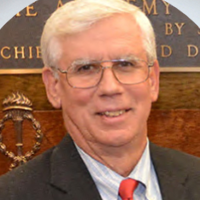 Link McKie has been a longtime newspaperman who in recent years added consulting and teaching to his career. His career began in 1970 as a regional reporter for the Telegram & Gazette of Worcester, Mass. In 20 years there, he was also a general assignment; city government reporter and columnist; copy editor; assignment editor; assistant city editor; city editor and managing editor for the Worcester Telegram, and managing editor/news for the combined Telegram & Gazette. He later became executive editor of The Sun of Lowell, Mass., and publisher of Journal Transcript Newspapers’ five community newspapers based in Revere, Mass. During the past 28 years, he founded and ran Lincoln Associates, a communication consulting company. His company was publication manager for the New England Newspaper and Press Association Bulletin. McKie has taught journalism at Northeastern University, Boston University, and Emerson College. He has received reporting awards, and newspapers he managed won awards for excellence. McKie received the Yankee Quill Award in 2016 and is a member of the New England Newspaper Hall of Fame.