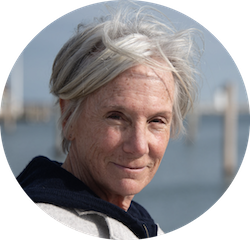 Julia Wells has devoted her entire professional career to covering her Island community. After moving to Martha’s Vineyard fresh out of Wells College, she joined the New Bedford Standard Times’ two-person bureau in 1973, then worked for the Cape Cod Times when that newspaper eclipsed the Standard Times as the Vineyard’s preferred mainland paper. In 1984, she joined the Vineyard Gazette, where she served as senior reporter for many years before being named editor in 2004. Over more than four decades, Julia has chronicled the Vineyard’s evolution from a quiet backwater where artists and writers mixed easily with farmers and fishermen to an elite resort and vacation getaway for Presidents Clinton and Obama. A fearless reporter, graceful writer and skillful editor, Julia is also a demanding leader who holds herself as much as her staff to the highest standards. A guardian of the public’s right to know and a mentor to many young journalists, Julia Wells is a shining example of a consummate news professional.