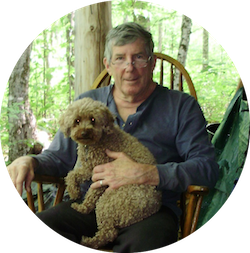 John Dennis Harrigan has been an important part of New Hampshire journalism and newspapering, both daily and weekly, for more than a half century and counting. He is the quintessential newsman. He has done it all in various media, often appearing on public television and radio, but most of his world has revolved around newspapers. He is probably best known for working full time for several years at the New Hampshire Sunday News, and he kept writing his column, “Woods, Water & Wildlife,” even long after he left the paper’s employ, continuing the column for a 37-year run, one of the longest-running columns in the state. As publisher of the Coos County Democrat, he founded the weekly direct-mail tabloid, the Northern Beacon. He also purchased and ran a four-unit Goss press producing his newspaper and the newspaper long published by his father, the late Judge Fred Harrigan. His informed, respectful, and often humorous columns have introduced and educated generations of readers to New Hampshire’s outdoor vistas and wildlife.