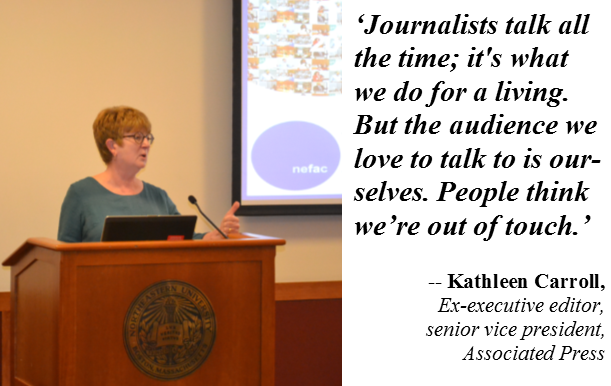 Kathleen Carroll, former executive editor and senior vice president of The Associated Press, thinks that today’s journalists need to reach out to their readers, through investigative reporting and news collaborations.

“Have you been in a conversation, maybe over a beer or at a panel, where the question of regaining the trust of your audience has been brought up?” Carroll asked the more than.40 people who attended her luncheon speech Oct. 31 at the New England First Amendment Institute. The audience included the 25 journalists selected to attend the three-day Institute, held at Northeastern University in Boston.

“Journalists talk all the time; it’s what we do for a living. But the audience we love to talk to is ourselves. People think we’re out of touch,” she said.

Carroll followed up that comment with more questions for the audience relating to the relationship between a publication and its readers.

When Carroll asked whether they as journalists thought that they were reaching out enough to their own audiences, the journalists present responded with a resounding no.

Carroll thinks that investigative journalism in local communities is one of the most effective ways to reach out and connect better with audiences.

She used as an example of that the work done by a newspaper in Illinois.

“Great work might not move the needle by itself,” Carroll said.

Coverage must continue past the initial story to be effective, she said.

Carroll ended her speech by posing three challenges that she said all newsrooms and journalists should take on:

Carroll began her career as a police reporter for the Dallas Morning News. She now works to help endangered journalists and to advocate for press freedom globally as chairwoman of the board of the New York City-based Committee to Protect Journalists. Before stepping down from AP in December 2016, she was responsible for its news coverage in more than 100 countries. Carroll served on the Pulitzer Prize board from 2003 to 2012.