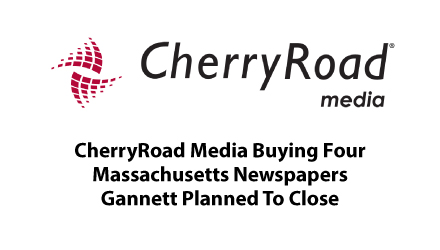 A fast-growing newspaper company is entering New England with its purchase of four local weekly papers in Massachusetts.

CherryRoad Media is buying The Landmark in Holden, the Leominster Champion, the Millbury-Sutton Chronicle and The Grafton News from Gannett.

The sale, which a Gannett spokesperson said will close late next week, means the company’s plans to close The Landmark and print its final edition Sept. 15 have been scrapped.

“When we heard about the potential closure of The Landmark, The Grafton News, the Millbury-Sutton Chronicle and the Leominster Champion, we reached out to Gannett to see if they could be saved,” CherryRoad Media CEO and founder Jeremy Gulban said. “The bond between these newspapers and the numerous communities they serve is strong. We are excited to engage with Gannett to enable the continued operations of these newspapers as part of CherryRoad’s growing family of community newspapers.”

CherryRoad Media will own 71 newspapers in 12 states with this purchase and that of three Michigan weeklies recently.

CherryRoad Technologies, the parent company of CherryRoad Media, offers technology solutions such as cloud hosting and other network systems, was started by Gulban’s father in 1983. Jeremy Gulban reportedly took over operations in 2008, and they entered the news industry in 2020.

Compiled from reports in Telegram & Gazette and Mediapost