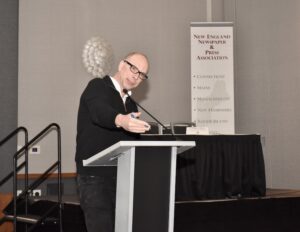 Professor Jay Rosen from New York University presented what he describes as a more engaging and people-centric form of election coverage known as the “citizens agenda” model during the second day of programming Saturday, April 30 at the NENPA convention in Boston.

Describing the problem that the citizens agenda model seeks to solve, Rosen said “Traditional election coverage, which starts just with the race and who is likely to win, is really focused on politicians rather than both voters…[and] viewers, and the campaign as it is traditionally reported kind of goes on without the voters until the very end when people vote.”

Rosen provided 10 key steps on how to effectively use this model for election coverage.

First, identify to yourself and your staff who you’re trying to inform – what voter base are you trying to give a voice to.

“If your audience is just ‘the public’ or ‘everyone’,” said Rosen “That doesn’t help you very much. But if you know who your audience is, you can more easily get a handle on what their agenda is.”

He also explained the importance of engaging a smaller community.

“If you take it seriously…you’re going to discover communities, or part of the community, that you don’t really reach but you want to reach,” said Rosen. “So, one way to do that…is to run a kind of ‘citizens agenda’ approach explicitly for that community…it’s a little different than the bigger or larger metropolitan agenda but…we’re going to be asking questions about that as well.”

The second is to ask those you identified what the most important issues are to them. What do they want political candidates to be discussing on the campaign trail? These questions are meant to replace the more traditional questions such as “who is going to win?”

Third, you should continue to ask these questions to everyone you encounter and engage with them as much as possible. Rosen also explained the importance of using every method at your disposal to reach your intended audience.

“You might have to do a great deal of work even to get this question to one part of the community or another,” said Rosen.

After you engage your audience, Rosen said you should then interpret the collected responses and priorities and synthesize them into a draft agenda.

“You’re going to start hearing patterns in the responses,” said Rosen. “It’s up to you to listen to those responses, hear the patterns, synthesize what you heard, and compose what you have heard into a kind of priority list.”

After creating this priority list, you should back into the field and test this list with the people you have been talking to. How accurate is this list and should you revise it? Only then should you publish your agenda as a “live” product on your site that can be available to candidates and the general public but can still be revised if necessary.

Rosen explains that your “citizens agenda” should guide your campaign reporting so that only the information the public cares about gets told. You should press candidates to speak on these issues and, whenever they do respond, report this information back to the voters.

“If these [for example] are the top five things that people…want the campaign to be about,” said Rosen. “Then we not only have to ask those questions…when we have an opportunity to interview the candidates, but we also have to do a lot of very detailed journalism about those things because we know people care.”

Towards the end of the campaign trail, Rosen recommends you build a voter’s guide for each candidate based on their responses and plans to tackle the issues most important to the people you talked to. Rosen advised that if the candidates are from smaller positions or positions that don’t typically receive much press attention, then you should describe and explain the roles of these positions to the people your list is based on so that they can provide issues to those candidates they can act on the most.

Until campaigning season ends and voting begins, you should constantly be revising and updating your “citizens agenda” to accurately reflect what voters feel is most important.

For a review of all 10 key steps to effectively use the citizens agenda model for election coverage and to download a copy of The Citizens Agenda guide visit https://www.thecitizensagenda.org/.