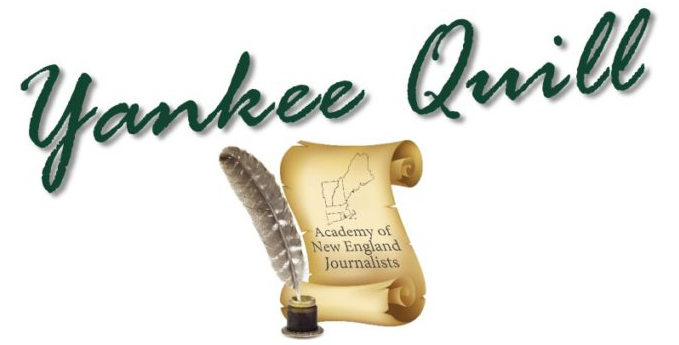 Registration is now closed. For more information please contact NENPA at 781.281.2053 or info@nenpa.com.

David Moats receives the Quill for his profound impact on journalism in Vermont and beyond with his thoughtful editorial writing and frequent public appearances on the value of a free press and the First Amendment to American liberty. His compassion as a journalist for the human rights of others earned him a Pulitzer Prize for his thoughtful and influential series of editorials commenting on the divisive issues arising from civil unions for same-sex couples.

Wayne Phaneuf is presented the Quill for his passionate commitment to journalism and community. From reporter to editor, from historian to historical writer, his broad experiences are demonstrative of someone who has taken his personal growth and experiences as a journalist to guide at least two generations of new journalists into careers of serving their readers. As a historian, he works steadfastly to ensure today’s readers are able to put the news events of their lives in perspective of the past.

Lou Ureneck is honored for his work in journalism as a teacher, mentor, writer and editor whose professional career ranges from cub reporter at the Providence Journal to executive editor at the Portland Press Herald. He is now a professor at Boston University’s College of Communication and author of two memoirs and an acclaimed non-fiction history book about the final violent episode of the 20th century’s first genocide.

Ken Squier receives the Yankee Quill for his strong commitment to sportscasting and community journalism that has made an impact on the local, regional and national level. He is credited with being the first person in getting flag-to-flag coverage of auto racing on television when CBS aired the Daytona 500 in 1979. Auto racing took off as both a national spectator and active sport following that national telecast, and it created countless jobs within the journalism world.

Henry Martyn Burt (posthumously) During his tenure as publisher and editor of the mountain-top newspaper Among the Clouds, Henry Martyn Burt (1831-1899) was struck by lightning, arrested and jailed for libel, developed a way to beat his competitors by “sliding” his newspaper down a mountain railroad track to readers, but most important, Henry Burt’s mission was to share his enthusiasm of, and draw people to, the White Mountains of New Hampshire.