The gathering was intimate but sentiments filled the room as three new inductees were welcomed into the New England Newspaper Hall Of Fame February 7. The gathering, always a highlight of NENPA’s Annual Convention, took place at Boston’s Renaissance Waterfront Hotel.

Each year, a panel of NENPA Executive Board members and Executive Director Linda Conway review nomination packages to honor the most outstanding newspaper professionals from the association’s six-state region.

More than 100 individuals have been singled out over the past 50 years, and in 2020, the Hall of Fame celebrated John Dennis Harrigan, Julia Wells, and Carol J. Young. Each inductee and were joined by family and colleagues past and present.

In their lengthy nomination of Harrigan, co-nominators Joseph W. McQuaid of the New Hampshire Union Leader and Sunday News, and Nancy West, publisher of InDepthNH.org extolled his “more than a half-century illustrious career as a statewide reporter, outdoor writer and North Country newspaper owner.”

Harrigan is well known to readers at the New Hampshire Sunday News, and his column, “Woods, Water & Wildlife,” was still running long after he left the paper’s employ, continuing the column for a 37-year run. As publisher of the Coos County Democrat, he founded the weekly direct-mail tabloid, the Northern Beacon.

“Harrigan’s columns, editorials, and feature writing have regularly presented a view of New Hampshire nature and wildlife to a statewide, often suburban readership that would otherwise be lacking in that perspective,” they wrote.

“His informed, respectful, and often humorous columns have introduced and educated generations of readers to New Hampshire’s outdoor vistas and wildlife,” they continued. “Sometimes, he just rants, and even when he is deeply pissed off, his words are a joy to read.”

In welcoming his nominee to the Hall of Fame podium February 7, McQuaid further related, “newspapering is in his blood,” adding that three of Harrigan’s four children, like his father before him, are in the newspaper business.

“John could, and did, write everything,” McQuaid, a former colleague observed. “He could write outdoor features, he could cover a riot — which he did for us — he could go to Fenway Park and take pictures, he was extraordinary.”

McQuaid’s voice broke as he momentarily mentioned the tragic 1997 shooting at his News & Sentinel that took the life of “his editor and his best gal.” He went on to praise Harrigan saying, “he put out the paper that night…for his town, and his family, and his friends.”

As the Hall of Fame attendees brought him to the podium with warm applause, Harrigan remarked how wonderful it was to come to Boston “to hobnob with people who are passionate about what we do.”

He reminisced about walking away from a lumberyard job over half a century earlier and wandering up and down the Main Street in Nashua, New Hampshire, ending up taking a job at the Telegraph.

“That was the beginning – 1968, and the rest of it has been one hell of a toboggan ride,” he said. “I’ve gotten some great stories out of it, and met some wonderful people. But we still need gatekeepers,” he added, referring to professional journalists, whether they are working in print or on the web.

After moving to Martha’s Vineyard fresh out of Wells College, she joined the New Bedford Standard Times’ two-person bureau in 1973, then worked for the Cape Cod Times when that newspaper eclipsed the Standard Times as the Vineyard’s preferred mainland paper. In 1984, she joined the Vineyard Gazette, where she served as senior reporter for many years before being named editor in 2004.

“A fearless reporter, graceful writer and skillful editor, Julia is also a demanding leader who holds herself as much as her staff to the highest standards. Night or day, when news breaks on the Vineyard, you can be sure that Julia will be directing coverage and, if circumstances require, making the phone calls, taking the pictures, filing the story online and teasing it on social media,” Seagrave continued.

“A guardian of the public’s right to know and a mentor to many young journalists, Julia Wells is a shining example of a consummate news professional,” Seagrave added.

Welcoming her friend and colleague to the podium February 7, Seagrave noted that “everyone at the Vineyard Gazette understands that what we’re trying to do is something more than just cover the news on Martha’s Vineyard. And the keeper of that flame for the last several decades is Julie Wells. In many ways Julie is the Vineyard Gazette.”

Through everything from hurricanes to small community selectmen’s meetings, Seagrave said her colleague willingly covered “roiling debates and disputes that went to the heart of what Martha’s Vineyard is.

“She was and is a student of the island’s history, she knows the most arcane zoning regulations, the intricacies of school finance, she can probably quote most of the Steamship Authority’s enabling legislation,” Seagrave said, “and she writes with equal authority on where wildflowers, grass sand plains, striped bass regulations, legal maneuvers, real estate transactions…and she happens to know where the best blueberries are on the island.”

As Wells took the microphone she commented that in all the years of attending NENPA and before that NEPA conferences, “I never knew what went on in that Hall of Fame – and I’m honored and humbled to represent the Gazette here tonight.”

Stating she is proud to be “an old school, fearless crusading print journalist…always working to shine a light on others.” She recognized a number of her staffers who all played roles in supporting her work, and reminded attendees that the Gazette has been maintained for decades as “a teaching paper.

“It’s a responsibility to continue that tradition and I carry it – sometimes heavily – but never alone,” adding that writing about friends and neighbors she sees every week in the grocery store provides the ultimate opportunity “to make a difference.”

“There are so many things that go into making a community newspaper, sometimes we win awards, and I’m so grateful to the Gazette – the little paper that does big things – and to the Gazette giving me the opportunity to win this award.”

Last but not least, Alan Rosenberg, executive editor of The Providence Journal, headed to the podium to talk about former colleague Carol Young, who was nominated to the Hall of Fame by the Journal’s Managing Editor, Michael McDermott.

During 45 years at the Journal, Young rose from small-town bureau reporter to statewide education reporter, and eventually to deputy executive editor – second in charge of the news department. She was a leader of the Providence Newspaper Guild during a time of labor strife, before becoming the first woman to join the Journal’s management team in 1979.

Young was a guiding force behind the newspaper’s intern program, serving as a mentor for many who would go on to careers at the Journal and at other publications around the nation. Since retirement, she has remained extremely active in her community – and in 2018 she was named one of the state’s “inspiring leaders” by Leadership Rhode Island.

Rosenberg further explained that he had heard about Young 42 years earlier when he was heading to work at the Journal, where “Carol turned out to be a lifelong mentor and a terrific friend.”

“I think that’s what makes her so rare and wonderful beyond her distinctions during her four-and-a-half decades at the Journal,” adding that Young was throughout it all “a fierce advocate for a free press.”

In 1984, Rosenberg recalled how after notorious Providence Mayor Buddy Cianci was arrested for assaulting his wife’s lover, Young contacted the outgoing mayor’s 29-year-old replacement, Joey Paolino, explaining that “he was in the big leagues now…and letting the Journal record his thoughts was part of the package – he let us in.”

Rosenberg also lauded Young’s “human touch, that also helped make her a great editor,” and mentor to dozens of up and coming interns at the Journal – reminding those at the Hall of fame dinner that Young remains vibrant and active in Rhode Island in her retirement.

As Young took the microphone, she recognized her fellow newly inducted Hall of Famers who, “all love to be in the room when the news happens.”

Young noted one colleague who mentioned that the downward spiral of the print news business started in 2010, the year she retired.

“So I thought, what – did I cause this crisis? But there absolutely is nothing funny about the decline of newspapers. It is sad, it is troubling, and it’s ultimately going to lead to people being less informed – or more likely mis-informed, and perhaps ill-equipped to be the one thing we all have to be: citizens we need to keep this democracy we have going.”

Young related the many ways that local newspapers touch and inform the many friends and neighbors in a community, and how “newspapers large and small are fulfilling their constitutionally protected role of being watch dogs of the government.”

She went on to observe how “newspapers create a community-wide foundation of shared facts, shared experiences, and shared values,” despite differing opinions in the readership, who nonetheless all used facts and information from the same newspaper.

“All during my decades in journalism, you could hear people say ‘it must be true, I read it in the Journal.’ But the loss of trust in the mainstream media haunts me – and it’s particularly unsettling because the loss of trust is occurring while newspapers are struggling to reinvent themselves and to hold onto principles they always had.”

She observed that “current assault” of the “big guys” in journalism coming from Washington, D.C. “is more vicious, and baseless. The ‘fake news’ [claim} is so baseless, it’s so deliberate, calculated, it’s so damaging, and it’s so wide spread.”

She praised the Journal for a current series featuring newspapers staffers, revealing “why they’re doing this job, something they were called to do, who these people are covering the news so maybe people will trust these people a little more.”

In discussing why keeping the First Amendment strong matters, Young said “newspapers can only fight back by not backing down, and holding their ground as community watchdogs – who “own it and correct it when we slip. That’s what newspapers do.”

In closing, Young said newspapers need to expose more about themselves, what they do, and why they do it.

“That’s what we have to somehow tell people,” Young said, “what the world would be like without us. There is strong journalism going on around here. It’s important, and it’s not fake news.”

John Voket is a contributing writer for the eBulletin and former NENPA President.

2020 Hall of Fame Dinner Photos
(Please note these photos are not hi-res. If you’re looking for a better quality photo from the event, please email info@nenpa.com) 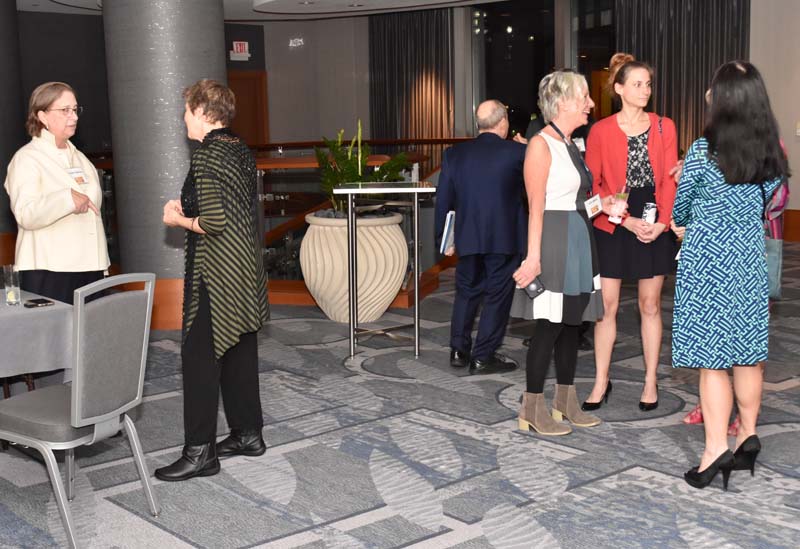 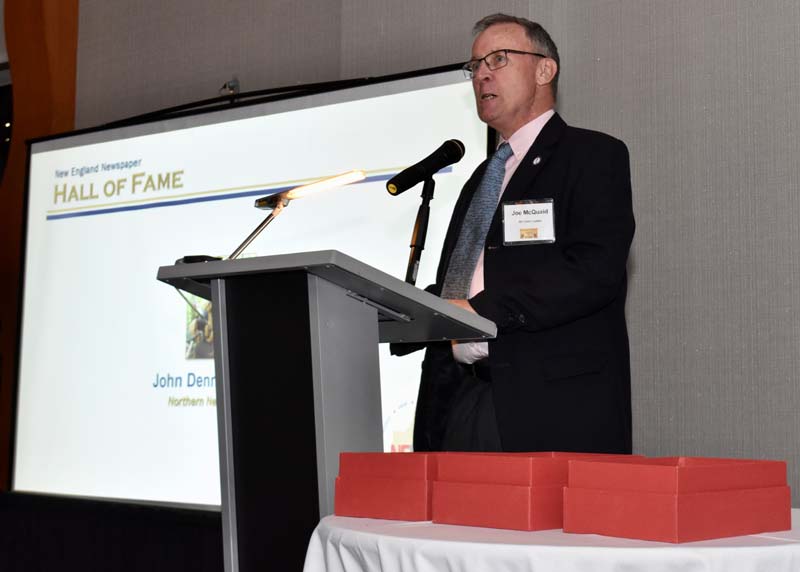 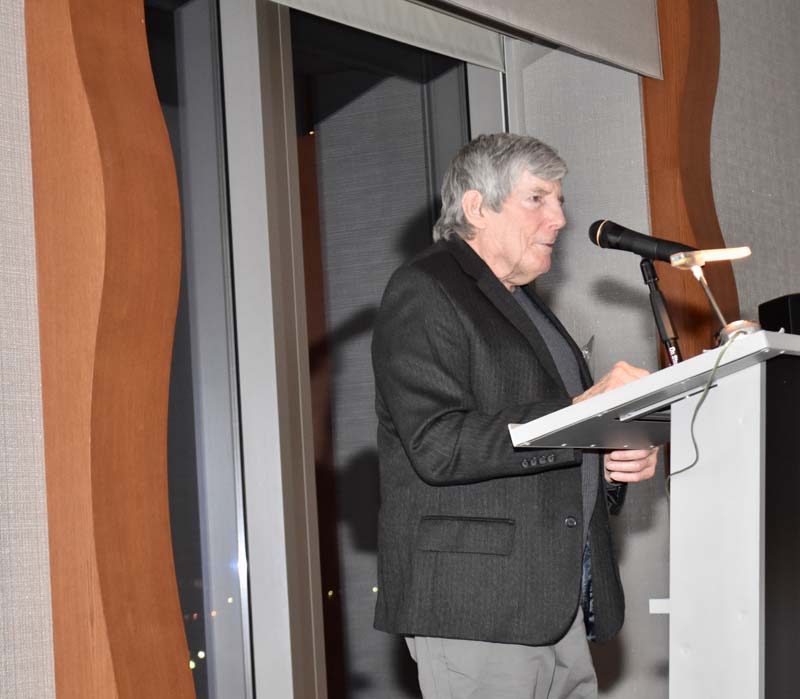 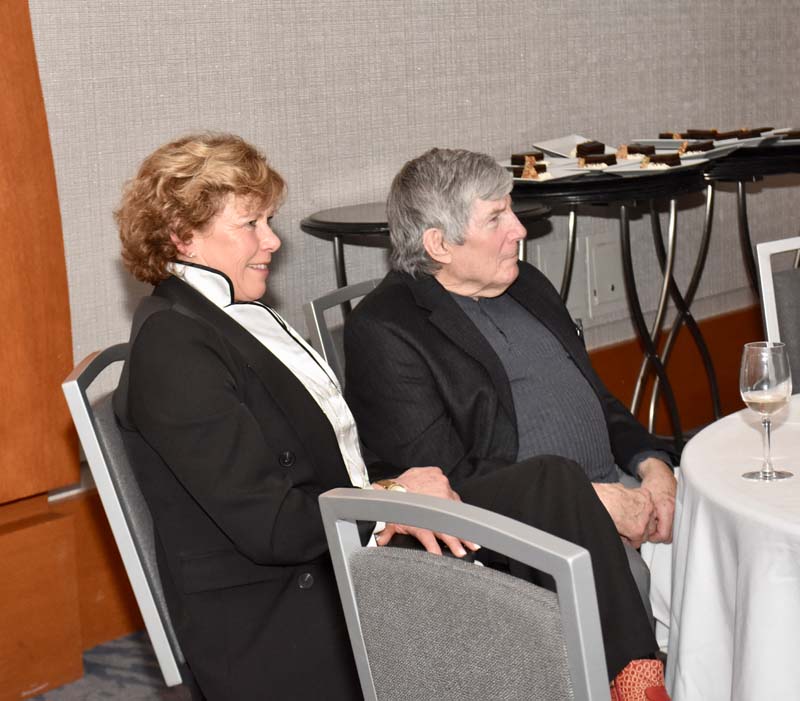 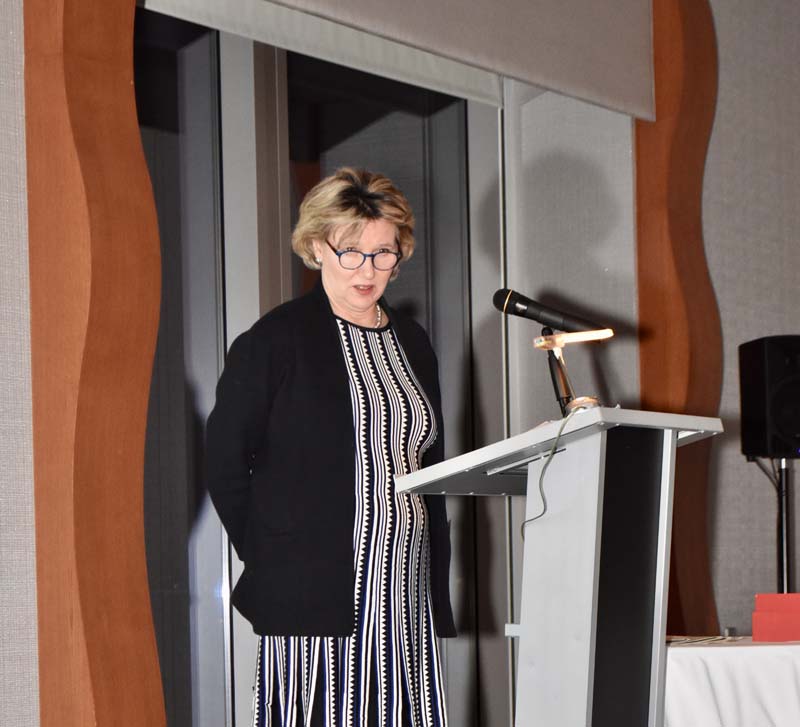 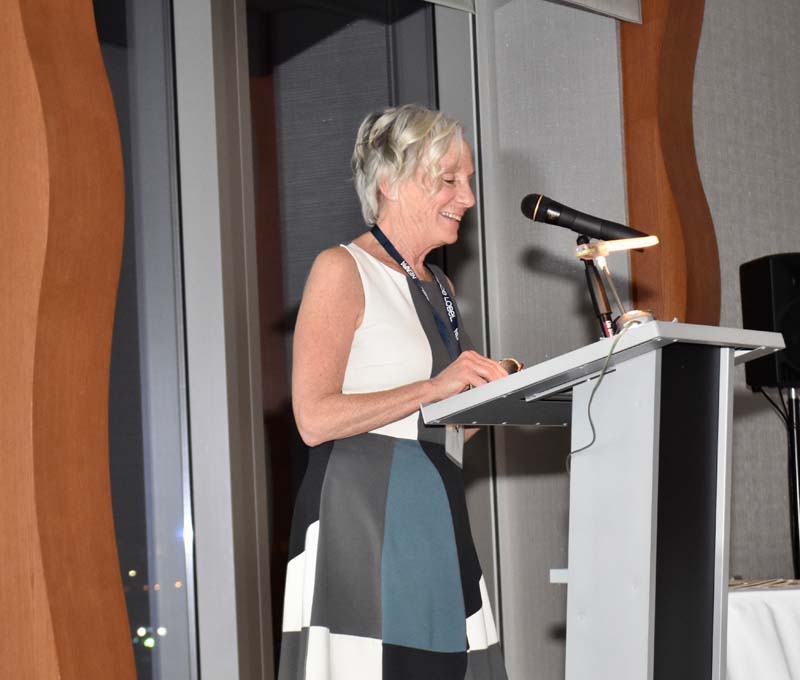 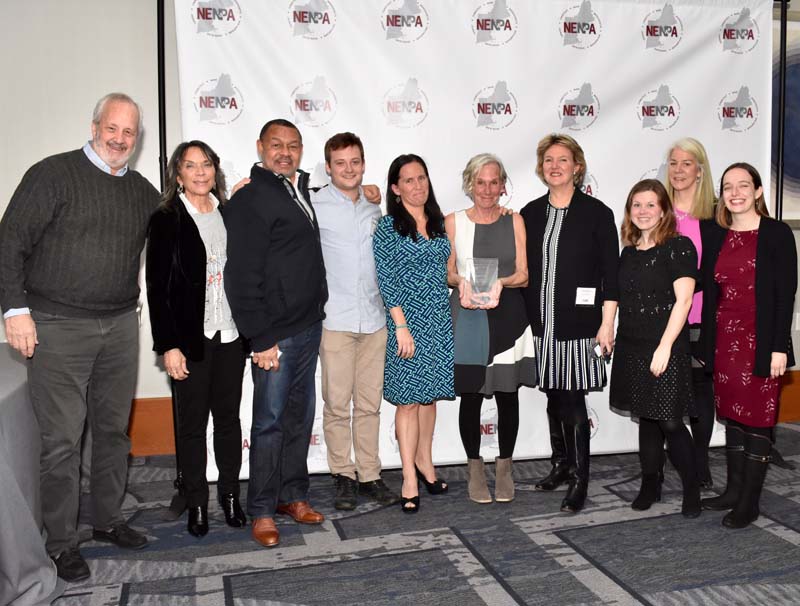 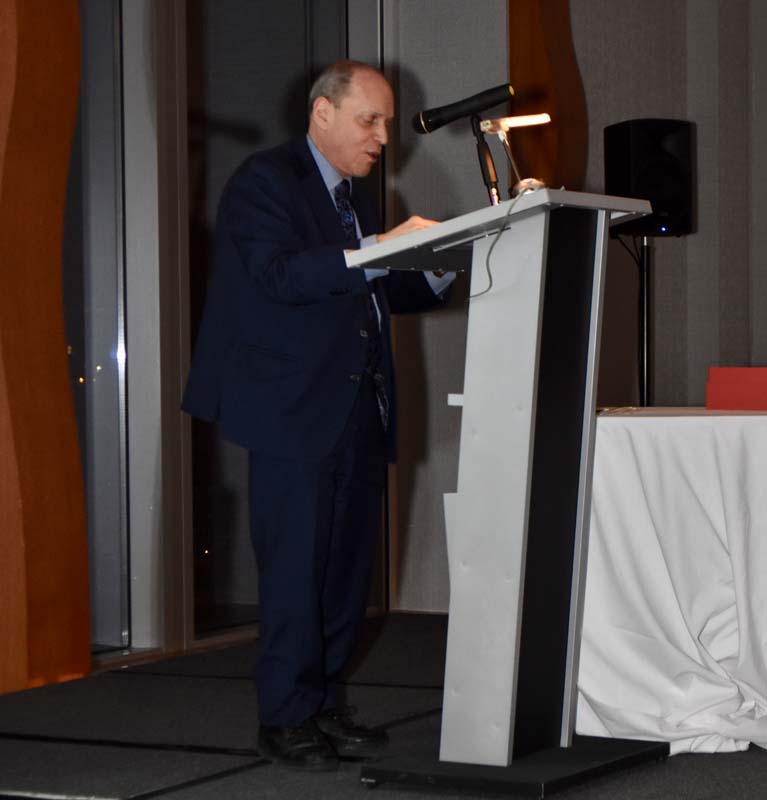 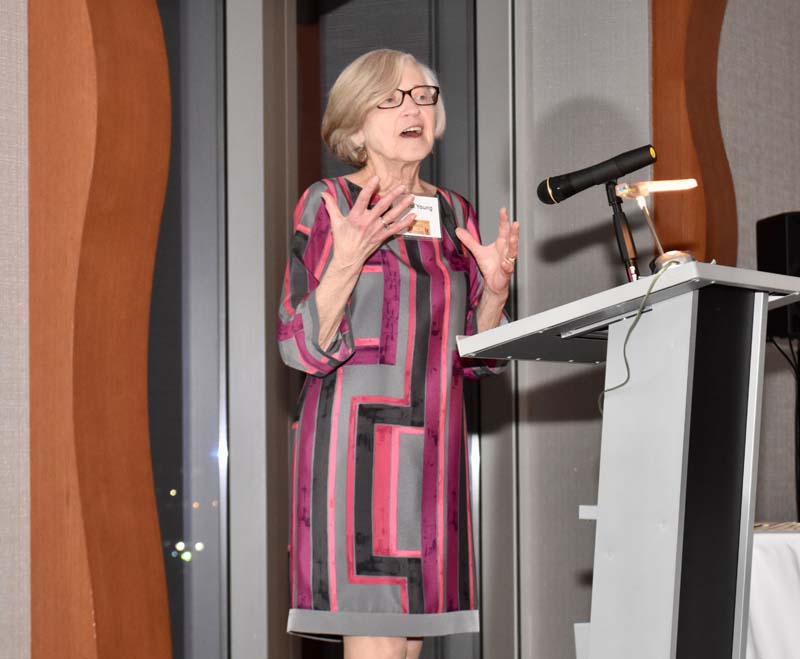 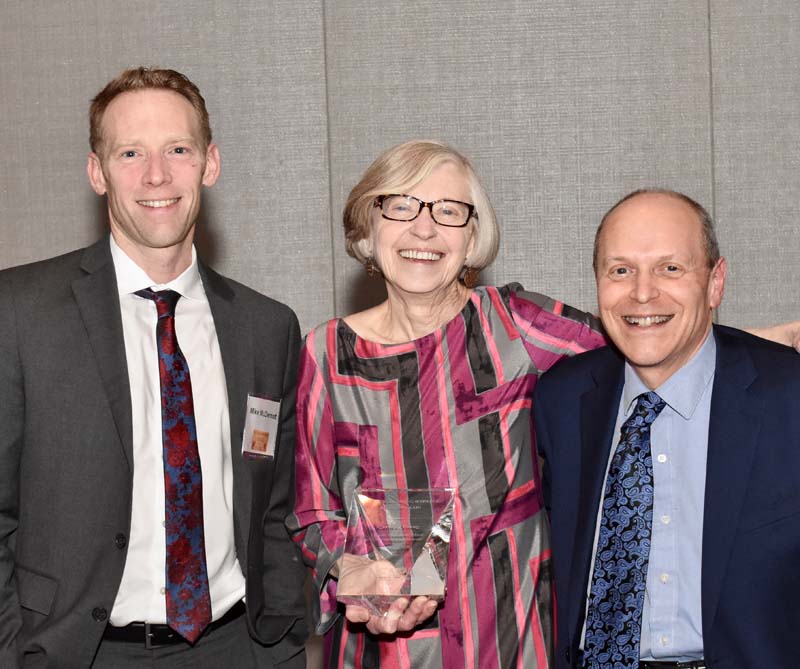 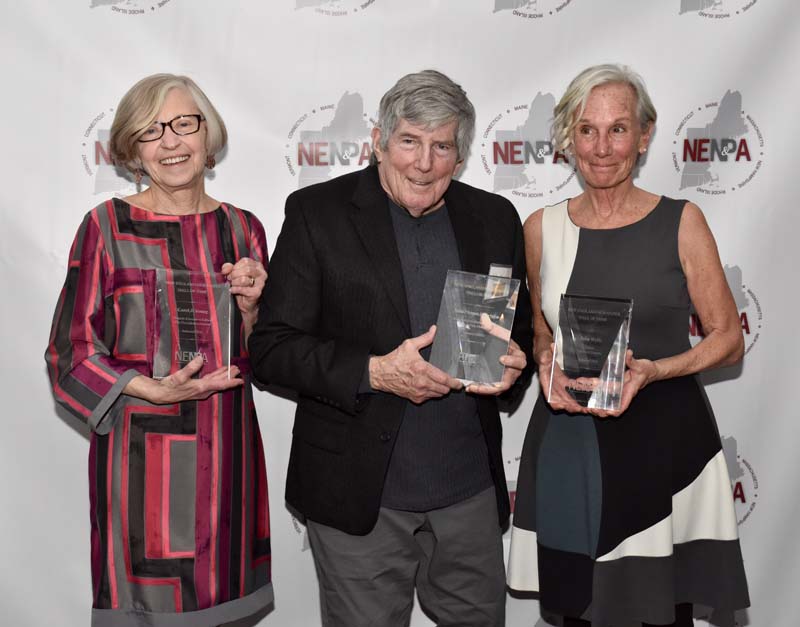 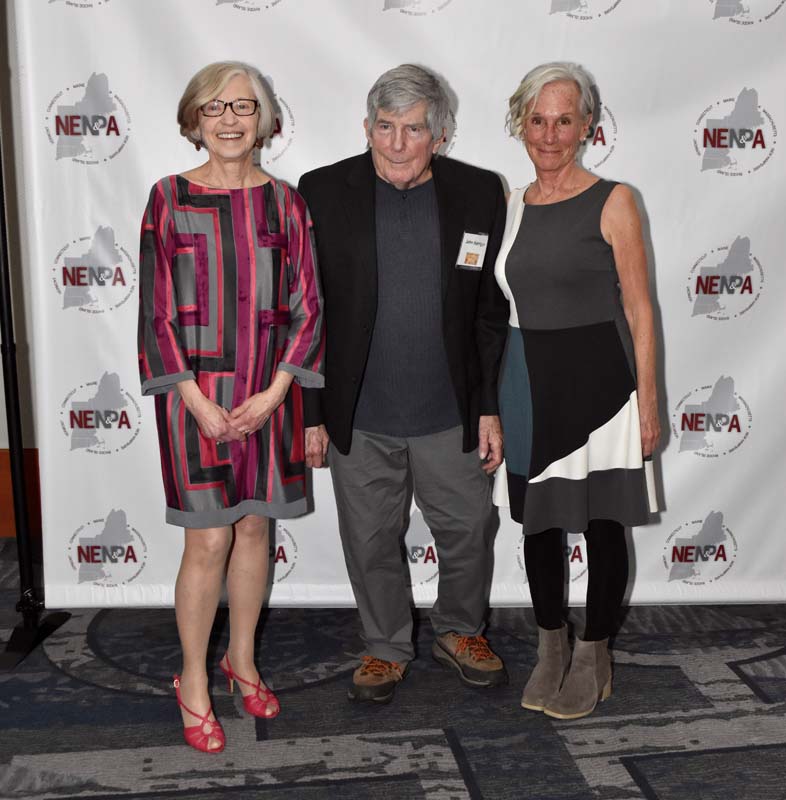 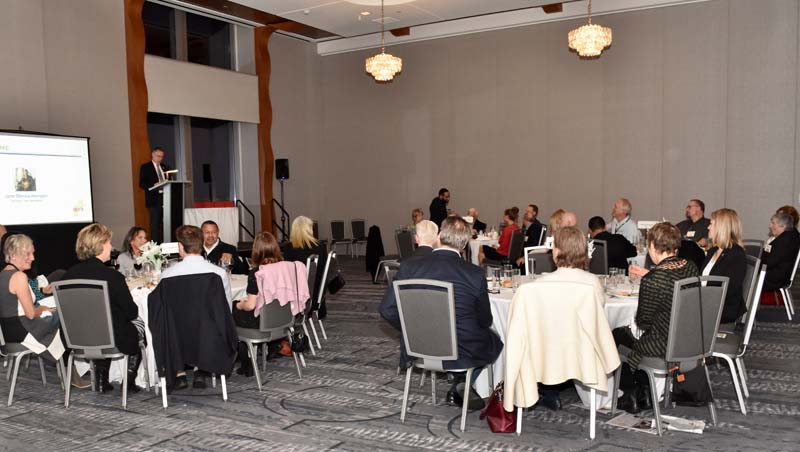 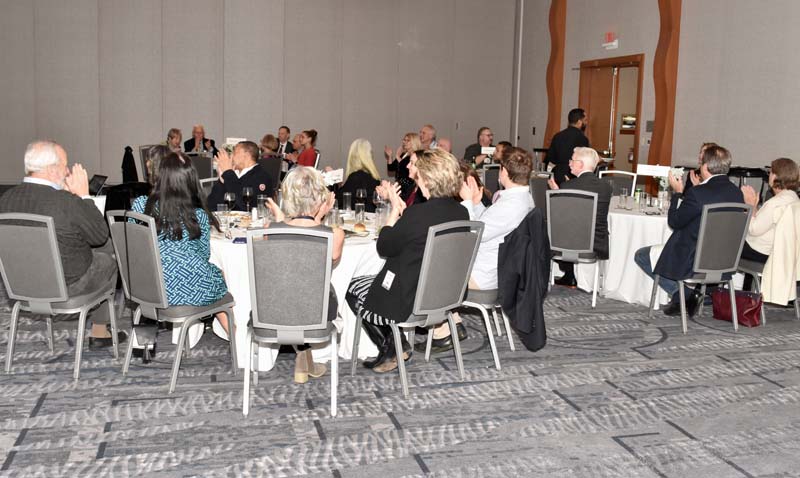