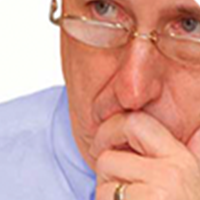 ED HENNINGER has been an independent newspaper consultant since 1989 and is the Director of Henninger Consulting in Rock Hill, SC. He is universally recognized as the world’s leading design consultant for community newspapers.

The Southampton Press, one of Ed’s redesign clients, has been named the Best Community Newspaper in the nation by the National Newspaper Association. From the judges: “Spectacular package of information—news, features, photos, ads—all excellently produced. Clean, fresh design, layout throughout. Great No. 1 in a strong field.”

He recently completed redesigns of the Cullman Daily Times in Cullman, AL; the
Spencer Evening World in Spencer, IN; The Clay County News in Sutton, NE; the
Madelia Times-Messenger in Madelia, MN; and the Holyoke Enterprise in Holyoke, CO
Ed has traveled to the Ukraine, the Republic of Georgia and Armenia to offer design
workshops and assist with redesigns of several newspapers in those countries.

He created the Francis A. Henninger Grant Program with the goal of making newspaper
design services affordable for every newspaper—especially those with limited
circulation, revenue and staff size. It’s Ed’s effort to reach out to those publishers and
editors who believe their newspapers can’t receive professional design help. Ultimately,
the objective is to bring a new level of design, direction and distinction to those papers
that qualify.

His column on newspaper design appears regularly in Publishers’ Auxiliary, the
publication of the National Newspaper Assn. His column also appears in the bulletin of
the Southern Newspaper Publishers Assn. as well as newsletters of press organizations
throughout the U.S. and Canada. It is also distributed free to subscribers worldwide.